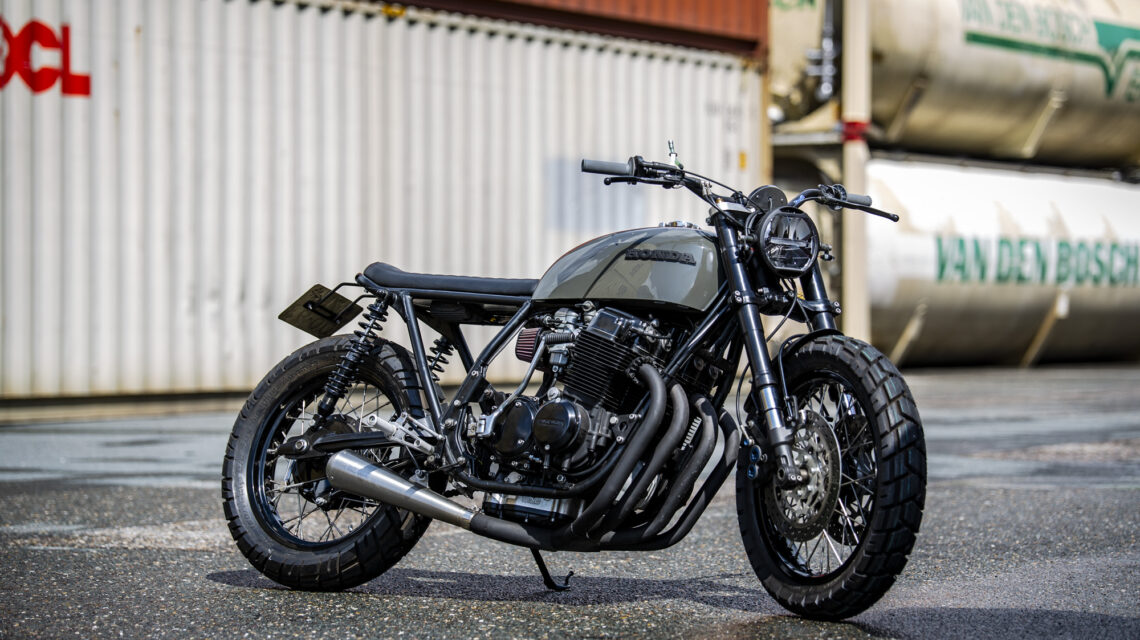 CB750 for Bart. This f2 came to us as a runner, but with a variety of small and big problems.
After a brief back and forth with the owner we decided the engine needed a good amount of love so we started with that as the engine internals are a non-design thing and do not need to be discussed about. We always ask our clients lots of photos from bikes they like so we can get a good understanding of their wants. With Bart, all the pictures had a bike with an empty triangle underneath the seat…

We examined the pro’s and con’s of the available options regarding oiltank relocation and soon found out there wasn’t anything on the market at that time, other than homemade circus-acts and long-hose bodge-jobs. As we wanted to keep the bike as clean as possible we started to hatch a plan that would take two years to accomplish. Sumpthing was born.

During a build there are hickups. Some long, some short. But it never goes flawlessy. In those ‘free hours’ we investigated the inner engine works, the oil pump, oil flow diagrams and many more variables for our project. a 3d printed prototype gave us the final answer, it could be done! As soon as we discovered that everything fell into place. We discussed with Bart if we could use his bike to test the kit with in exchange for a Sumpthing kit. Luckily he said yes!

Because the original tank hangs in tabs on the frame we had to know for sure if the kit worked. Thru a forum, SOHC4.net, we met with Rob Bosschieter from Voxonda. Rob earned his stripes in the SOHC world with vintage racing, tuning and his infamous dry -clutch conversion kit. We didn’t know but we live 100km apart. What are the odds..

Soon after our online meet, Rob came to the shop to check out a prototype. He was positive about it in such an extend that he volunteered to run it on his pumped-up 750 during a vintage race. We were over the moon from the idea alone, but even more when Rob reported the kit worked perfectly!

The prototype was ugly and had testing-holes everywhere from sensors and tubes, so the CNC drawing was updated by our friend Roel Scheffers from Scheffers Engineering in Norway and ordered the first batch. We build a website and started to sell the kits. For us, it became a prestige thing. We had lot’s of guru’s tell us it couldn’t be done but it felt like robbing a bank succesfully to us. The demand was WAY higher than production rate and we soon had a huge back-order. Fuck.

Back to the bike. Bart wanted spoked wheels instead of comstars and he also wanted a USD fork conversion. We customized the front hub and laced new rims to CB550 hubs. Rear is a drop-in apart from some spacers, front is fixed with CNC spacers and bigger bearings. Disks have the same 6 bolt-pattern so kinda drop-in. Top yoke was CNC machined by Scheffers Engineering in Norway. The pin was welded thicker and turned down to fit in the lower yoke. Koso headlight, Renthal risers, bars and grips as requested by Bart with some Motogadget porn to top it off. Clean.

Exhaust is stock with a Spark muffler, our go-to brand for mufflers. Little custom hanger on there aswell, keeping it tucked and tidy. Brackets for rearsets were a good days work. Cut, bent, drilled, shaved and welded to the frame. Rear end with the hoop received little holes where the tailight and signallightsare hidden. Free from damaging and unnoticable until on, it gives a very clean look. Custom made Bitubo shocks finish it off nicely.

All electrics are hidden under the tank, apart from the regulator. Was a massive puzzle to get it all in there but it worked out beautifully we think.Seat got the SilverMachine treatment and is as good as they get. Jeroen really is the best! Last bits were put on and testdrives were made. All good!

Back to the Sumpthing kit production stages; We outsourced the first batches but it was almost non-profitable for us. A walk to the bank later, we had invested in our own CNC machine. Shit just got real. Orders kept coming in, but we were on a point were we couldn’t outsource the kits anymore, but our own CNC was not in yet. We decided to put the kits ‘out of stock’ in the webshop to not let the orderpile get to high.

Daily emails and orders regarding the kits still came in. We had to get this show on the road again! Finally, our CNC arrived and we started with the installation. A couple weeks further, the machine sort-of worked, but just say it’s a bit more complicated then a vacuumcleaner…

While writing this the machine is running smooth and producing kits for the backorder list. We’re way behind scedule but gaining ground again. If you’re reading this and ordered a kit, thanks for your patience. It’s been a hell of a ride so far and we’re doing our absolute best to get the kits to you guys!

For more info about the kit go to www.sumpthing.net or go to our webshop!