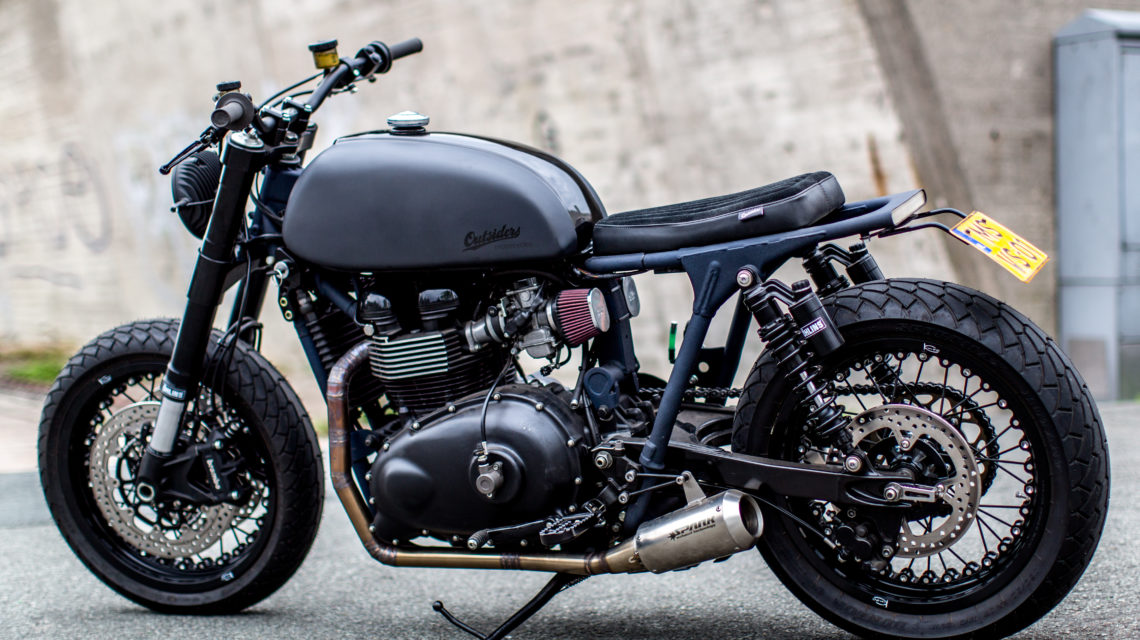 Triumph T100 EFI for Douwe. Douwe came to us through the Instagram page of our friend Albert as he was working on his own bike that time and used Instagram to document his progress. Douwe liked it so much he asked Albert if he could build him a bike, but Albert told him to see us. 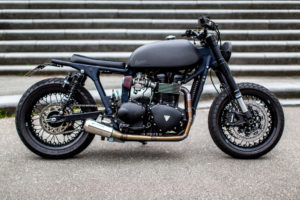 Douwe came over to the shop and we discussed what donor we would be using. Our first bonnie was in the last stage at that time and Douwe liked it. We talked about the pro’s and con’s of 1,2 3, and 4 cilinder engines and CC’s and after a couple days we decided it had to be a Bonnie. This 2008 model was a perfect donor as Douwe wanted the vintage looks but the modern performance and reliability.

We found this bike with a little help from Leonard over at the Triumph dealer here in Groningen and so it began, our second bonnie… Good times!

Douwe likes tech stuff and we soon came to the conclusion we would make a custom taillight with the signallights going from one side to the other, like the modern Audi cars. As we never did a custom taillight before it took a little time to figure out how to accomodate the (yet to make) light in the frame. As the front light has a bar thru the middle and the frame accomodated this solution pretty neat, we made a hollow chamber into the frame. The frame got powdercoated at Custom Coatings Helvoirt, crazy good quality! With the frame and lower rails away to be coated, we focused on the front.

During our conversations with Douwe, he made it clear he wanted a bike that would make a serious impression on anyone who had been around bikes for more than a couple minutes. As said before, high-tech racestuff was the way to go and so we contacted Kineo Wheels in Italy. We got a list from their wheel combo’s and we soon found out the only forks they made the front wheel for were from a 2016 MV Augusta Brutale 920…

Now, we are good friends with the people over at Boonsta Parts and luck was on our side, they had the forks in stock. The steerertube had to be machined and after that, the forks were fitted in the fresh coated gravelblue frame and it started to look like a motorcycle again. The wheels were wrapped in Dunlop Mutants, once more to keep it as tech/aggresive as possible. Roel at Scheffers Engineering does all our CNC work (Yes, the SumpThings too) and so the original top-yoke was sent over to him to work his magic. Let’s just say he didn’t dissapoint. 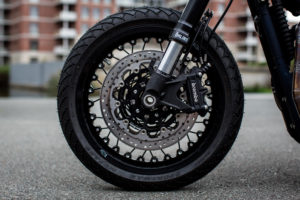 The engine was placed back and we began fabricating the exhaust system. Again, Douwe was very clear on this part. It needed to be loud. Wish granted, courtesy of the Spark GP mufflers. The front brake had to be something different aswell. We found a Magura lever with external reservoir but it didn’t make a nice symmetrical view with the cable operated clutch lever, so we ordered the Magura clutch aswell. Now, Magura sells a system to make a cable clutch work with hydro levers, but what would be the fun it that? Nah, it had to be special. As we wanted to play it safe, we searched for an extra engine cover and again, Boonstra Parts got the left engine cover in stock. Partly scratched but fortunaly exacly on the spot were a hole was needed anyway. We also picked up a clutch slave cilinder from them and a week later we had a full hydraulic clutch system! 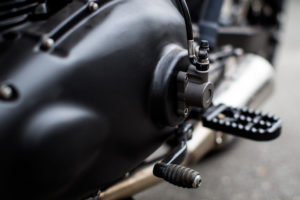 As with every client, we asked Douwe to look for inspiration pics. It gives a good view in the clients mind and we found out it’s a great way to start a project. Douwe had a Virago from AdHoc in his favorites, with a (super rare) Suzuki GT750 tank on it. The tank looked so good once photoshopped on the Bonnie we had to find one. The Suzuki tank was cut in half, as was the original T100 tank and we welded them together as the internals from the original tank were needed for the fuelpump assembly. The aluminum seatpan was shipped to Jeroen Bouwmeester at Silver Machine and we went to Rooske Suspension to get the suspension upgraded. As Douwe runs Pizzaria Buurman & Buurman in Groningen, we asked Lisa Stollé Jewelry to make a silver pizzaslice to replace the Triumph logo. The headlight and signallights are from Koso and Motogadget, Taillight is custom made and controlled thru an Arduino and the M-unit Blue.

Big K&N filters, Dynojet kit and a couple Dynoruns later we had around 80HP (64 stock)  so Douwe got to try it. He jumps out of planes for fun and after a couple times around the block he said the G’s from acceleration felt like free falling. Job well done. 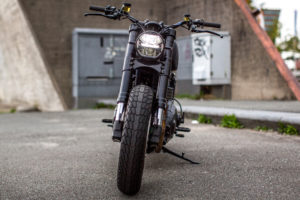