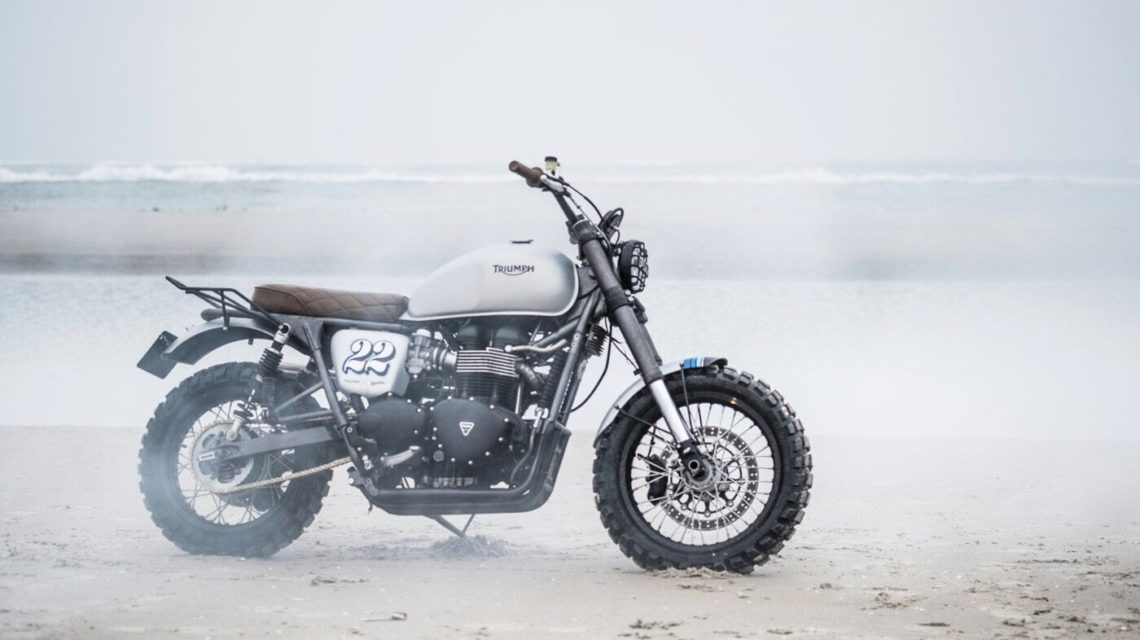 We met Bert Jan Blok & Jene Bons, founders of Outsiders Motorcycles, a couple of years ago at our first Paris show and were impressed with not just their skills but unrelenting passion for doing what they love. They’ve been quietly plugging away since, building bikes for friends and customers mostly without the fanfare that some workshops garner. In a break from Outsiders’ specialty, 1970’s Hondas, this Triumph was a chance to dabble with a newer motorcycle.

Bert Jan picks up the story “We met now longterm friend Floris Oud, the owner of this bonnie, years ago on Ameland during MadNes, a surf/skate/music festival where we’re part of the small crew and he is one of the organisers. Through the years we became good friends and talked bikes a lot. Last year, after the festival, we decided it was time for a proper build.”

“Floris lives on Ameland, and there is the annual ‘Triumph Treffen’. It’s a big meet with lots of Triumph riders from all over Europe. Floris really likes the brand and the engine characteristics of the big twin, so choosing a donor was easy, as was the theme. Ameland [a giant sandbar island off the coast of The Netherlands] makes for a great MX-playground which Floris enjoys on his WR450, so, we decided this build had to be a vintage MX tribute.”

After a long search a decent donor was spotted, a 2008 Bonneville that’d covered just 8000kms. Despite Bert Jan and Jene’s lack of modern (ish) bike experience they got stuck in and removed as much wiring as they deemed necessary, splicing-in a Motogadget Motoscope speedo, m.blaze pin indicators and an M-unit. Bert found that despite the EFi system being more complicated than bikes he’d previously worked on, the methodical process was enjoyable.

The subframe of the stock Bonnie didn’t suit the retro MX vibe so the rails were completely chopped out and replaced with new tubes, tig-welded to the backbone 30mm higher to level out with the underside of the tank, with an extended loop – inspired by 70s Montessas. Threaded bosses in the new frame allow the luggage rack to be removed. Slightly longer YSS shocks jack-up the rear and a KTM 690SM front end was purchased from a breakers yard. The forks were rebuilt and the Triumph’s stem machined and pressed into the KTM lower yoke. The large diameter disc and radially mounted Brembo caliper should make for one finger operation and give the Bonnie a stopper that many owners feel it should have had in the first place.

Wider Excel rims and stainless spokes on original hubs (KTM front and Triumph rear) allow for the chunky rubber, Michelin’s new Anakee Wild – 130 front and 150 rear. Renthal Fat Bars on RSD risers and a PIAA headlight were the last of the bolt-on parts.

Pretty much every other bracket, the battery tray, the luggage rack, heatshield, bashguard, internal tail-light housing in the fender, indicator mounts and bosses were fabricated in-house. The exhaust too, stainless pie-cuts welded together to form a traditional scrambler style pipe with left hand exit, again tributing the 70’s, and capped by a Spark muffler.

Friend and upholsterer Rachel Sarah diamond stitched a cover with their trademark logo for the stubby saddle while the tank, side panels and fenders were painted with a matt finish with the Bell inspired striping. When Bert Jan & Jene were happy that they’d achieved the vintage MX look they were after “All Oud” was sent to the Dyno to be tuned for the open pipe and air filters.

Still hot from the dyno run the bike was delivered to an eagerly awaiting Floris, who promptly ripped the Bonnie along the virgin sands of Ameland (Bert Jan & Jene pictured). Sure, this is perhaps not the natural home for a 200+ kg road bike but they had fun playing and most importantly the customer rode off into the sunset, happy.

The last picture kinda looks like the salt flats – A Bonneville on Bonneville. Perfect.