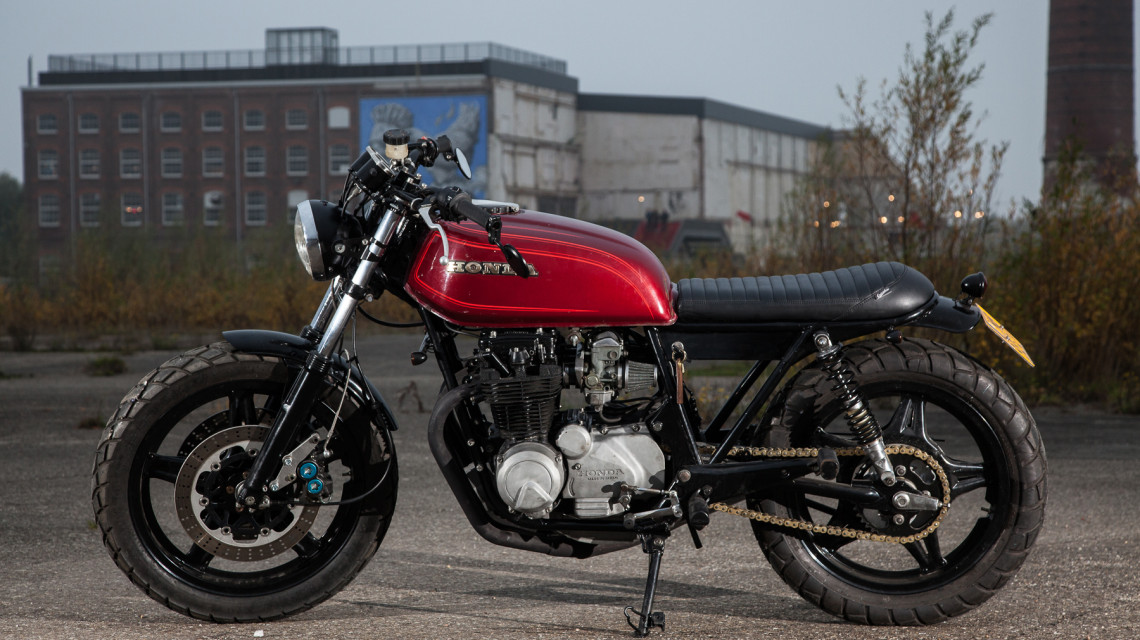 This is our 8th commissioned build. The customer is our good friend Nick who was with us long before we were a shop. We named the bike after Nick’s band; Meet the storm.
He worked on his bike now and then in our garage but decided to move accross country so the build went on hold while the shop grew and we were getting busier.
We decided the build would go on a slow pace as Nick wanted to do much himself due to finances and because he likes working on bikes.
We wanted to give him a good and cool bike but it had to be on a budget. We worked on it on ‘lost’ hours to make it work so it took way more time then our normal builds.

So, this is another cb650z from 1980. The bike was hauled from a guy on marktplaats couple years ago and Nick started teardown and such. We did the hoop and batterytray because we could do that on the tight budget. Nick first wanted a cafe racer but after some good discussions about what he wanted to use the bike for we went with the tracker/scrambler option as he would use the bike in the streets of Rotterdam for the most part. We explained him it was better to have a slightly higher sitting position so he can oversee the streets and ride comfortable on longer trips as well.

After the bike came back from the coater we rebuild the forks and put them back in. The engine’s top-end was overhauled (honed, new rings, lapped valves, new seals, lightly ported) when the frame was at the coater so that was put back in as well. The original front brakes were rotten stiff so we decided there had to come something else. Revision would cost close to 100,- and Nick found these bluespots with disks for 150,- so that was a no-brainer. The adapters and such were a small extra expense compared to the massive brake upgrade. We made spacers to make way for the calipers and as the disks could not be placed any more outwards before hitting the legs, we had to shave a couple mm’s from the calipers backside to make sure they wouldn’t hit the spokes. Tight. The braided hoses make a nice finish. (We sacrificied another bluespot caliper to check for material thickness)

As we did multiple 650’s we found out exactly which filters ans jets work best so we simply ordered and mounted those. The first startup to keep the spirits high was paired with a carb-sync. We were a year into the build by then.
Nick is very good at eBay-ing stuff, so he found himself the gauges, silencer and other small parts and we whatsapped back and forth about the ideas and such and it seemed the build was going on a steady pace.

Then the summer of 2015 kicked in and we got very very busy with commisioned builds, shows, repairs and vacation which is good ofcourse, but not for Nick’s bike. When the summer was over we got back on the bike as there was still a lot to do. First the loom was done from the ground up with all new connections. We use new wire and new connections on all our builds to keep the electrical gremlins out and we placeed small LED’s for oil and neutral in the headlight. The brakes came with a matching master and the controls are also from the same cbr900 (we think) so we adapted the loom to make the switches work. When that was done we got the seat back from our always awesome friend RachelSarah and put it on together with the original tank. Nick insisted on keeping the tank original and we think it came out nice. Then we went for a few shakedown runs. The rotor crapped out and we had a small oil leak on the shift axle. We took care of that and went for a longer trip. After a couple runs we asked our good friend Klaas van der Laan to take the pics. He also runs Old Dutch Leatherworks and made the leather strap on the dipstick and the branded keychain. Nick plans to pick up the bike in the coming weeks.