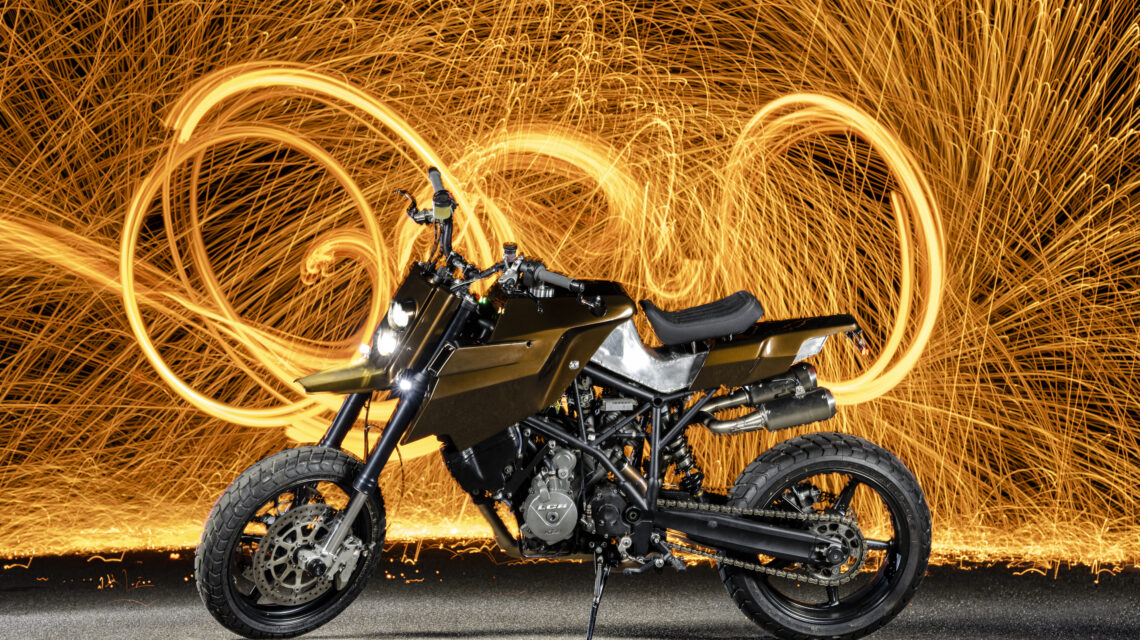 This 2006 KTM SuperDuke 990 came to us after a social media back and forth with Julian about customising a bike. We soon decided a bike that would stand out should be the plan and a full build was booked. Julian liked my work done to the Husqvarna Vitpilen 701 two years back but as he’s well above two meter, that was no option. He therefor decided that the Vit’s older and also bigger brother was the way to go.

I started with taking all the plastics of the bike. I didn’t plan on re-using them as besides cracked and scratched they were also rattle canned matte black so in the bin they went. I also removed the original speedometer to find out if the bike would still run without it, which it did, and worked my way up to the initial design. I like to keep the designs rough and basic, because it leaves room for improvements and ideas along the way as long as the big picture is clear.
The 990 is not that high to begin with and keeping the seatheight stock would clash with owner’s knees and legs. I therefor opted for a heightened, floating seat. This keeps the bike visually low and light without sacrificing too much comfort. One of the other first things sorted was the stance.The stock front end is quite low so a new set of legs was borrowed from the more adventurous 990’s brother. It makes for some serious height advantages over stock and the Hyperpro rear shock was adjusted to keep everything in spec.

I made a rudimentary seat with pieces of wood to check height and geometry and once that was ok’d by the client, I had the seat height and stance worked out. The actual framework could then begin.The subframe was the first thing that had to go and after the frame was put into the jig, a new Chromoly subframe was designed, machined and tig-welded on. Seatmounts and various other brackets were added and I also made the seat pan out of 10mm aluminum. As it’s supported by only 4 rods, I wanted to be sure it was strong enough. I also wanted to make it before sending the frame out to powder as fabwork easily scratches fresh coat. Better safe than sorry.Footpegs were lowered a good 8 cm, re-using the old upper mounts and welding them back lower onto the frame. The stock lower mounts stayed on and are now the upper ones.

After riding position was set in stone, I worked on a fuelcell design as the stock one wouldn’t fit into the design I had in mind. The sides were made from cardboard first and then lasercut to secure symmetry. The rest was cut by hand as it’s just faster then going back and forth to the computer and cutter due to the origanic shapes that occur when shaping them.  With the Fuelcell ready I started on the rear cowl section. Again, making it from cardboard first and then transferring it to aluminum. First one was binned. Found out the shapes I had in mind were tricky to do right the first time. so started over. The 3rd one made the cut and was smoothed and shaved until I was satisfied with the endresult. Fuelcell cover was next, same process but as I learned a lot from the tail, this was right the first time. The cover is bolted to the main frame with 4 bolts and gives access to air filters, electronics and battery if removed.
Fairing/fender combo was next and constructed just like the other bodywork parts. Cardboard first, traced, cut, shaped, welded.
I mounted the bodywork onto the frame and did some fast photoshops on it to see what colours would work. I then decided the raw aluminum tank looked way cooler then I expected in contrast to the very clean covers. Decisions were made.

All parts then went to paint and powdercoat and whilst waiting on that, the engine had a thorough service at KOBO, a local KTM dealership.
With powdercoat and engine back, assembly could start and with the engine in, I began working on the stainless exhaust system. It’s made from elbows, bent tube and straight tube and flow/length-wise i tried to replicate the set LeoVince has for this bike. back purged, tigwelded, springhooks and bungs added and Spark mufflers on,  exhaust was also done.
As with 90% of the builds I do, there’s a second run to the powdercoater and this time he did the exhaust hangers, speedo bracket and a couple other small brackets I made during build-up.
“ It’s a great stress reliever opposed to wanting all powdercoat done in one run as timeframe-wise, it’s virtually impossible to build the bike completely and then take it apart again for paint and powder as you always tend to forget to make that one little bracket because you changed, added or removed a part. A second run to the coater solves all that trouble. “
Forks were a bit worn and scrubbed so re-anodised and rebuild and a set of Pirelli MT60 tires added to the list. Front wheel, calipers and disks are SuperDuke so adapters were drawn and CNC’d to make it fit on the adventure forks with some little spacers fresh from the lathe. Fatbar and risers are supplied by Neken and a Motogadget motoscope mini resides in between the bars and tank, keeping the dash clean. I chose to keep the stock handlebar switches as this bike is ridden daily and needs to be 100% reliable. Not saying aftermarket switches suck, just my personal preference in this case.
Covers back from paint, it was time for 2 photoshoots with Diederik at Wincester Creatives and with help from intern Lynn, they delivered the goods.
This bike will be on display on the BikeShed festival, May 27/28/29 2022 at Tobacco Docks in London, UK.
*This bike is road legal in the Netherlands, was build in commission and therefor not for sale.