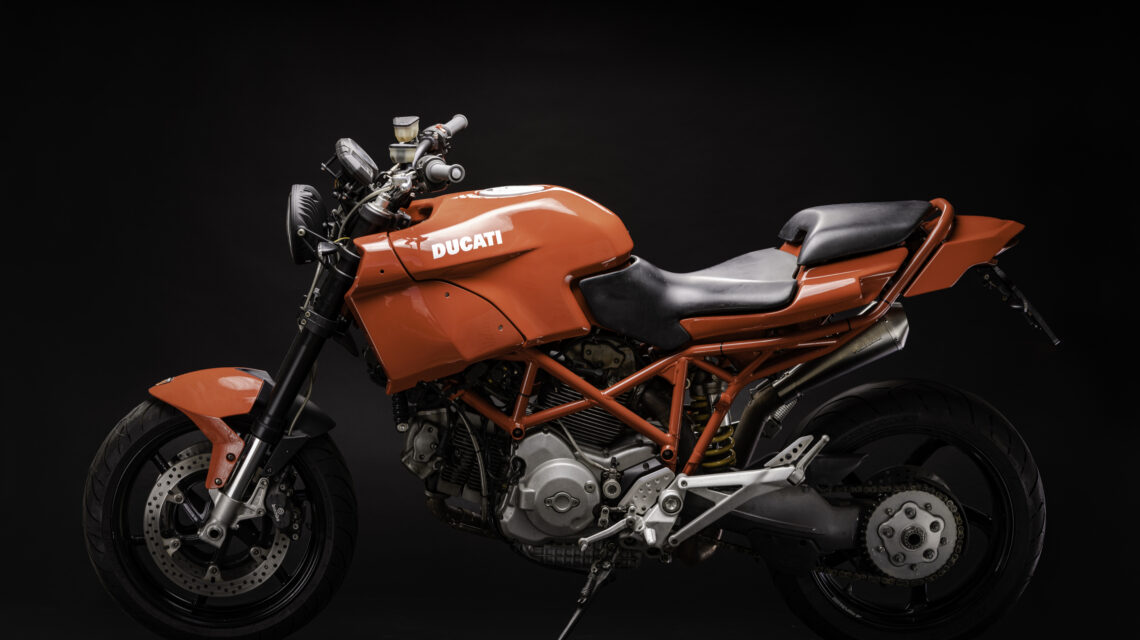 Max’ Multistrada 1000DS had seen better days when brought in on a trailer. As most people, he disliked the weird stock fairing and tail so much he had decided to take it off completely. Not thinking about what lies beneath, guts were on the floor and bike rendered unridable.
Still on the trailer, plans and budget were discussed. Due to the budget, the fuelcell had to stay and I had to work around it. Quite the challenge but I (not so) secretly love challenges.
That evening, I looked online to what others did to this particular bike and most just slap another Ducati tank on it and a caferacer seat. Boring. I quickly decided I wanted to keep the longhaul vibe the Mulstistrada gives but make it look faster. You could go 300km/h on a stock one and it would still look stupid…

As the stock fuelcell had to stay, i needed to make new sidepanels because the fuelcell looks ugly underneath the stock covers. The 2 tank-side covers were made from cardboard first and then transferred to 2mm aluminum sheet and hammered into shape. The planishing hammer did the rest but getting them to fit nice onto the fuelcell took some serious time.
With the sides done, I went to make the cowl using a taillight from a crashed HyperMotard that will be getting the same treatment later this year. The stock taillight on a Multistrada looks like Sid from the Ice Age movies and did not fit into the design.  The rear end of the frame was slightly modified with the stock hoop lowered and the mounting points for the luggagelracks taken off, removing just enough of the frame to make it cleaner without altering it too much. A bracket for the new silcencer was also added. After that, the frame, covers and all small parts went away for powdercoat and paint. The engine had a big service at a local Ducati dealership as I simply do not have the special tools and knowledge to properly service a Duc.

Max wanted the forks black anodised so with those taken apart also, nothing but a set of wheels and a swingarm remained.
With everything back, assembly went fast as 90% is still stock and she was up on her wheels two days later. Like said, Max wanted a new exhaust so a Spark one was added into the mix with a little custom hanger. Front was cleaned up by a Koso thunderbolt headlight, Neken risers and fatbars and a custom bracket for the dashboard.
Upon delivery, Max happily said he hadn’t expected to have some much work done for the budget and as of now, we’re just about to discuss his next build.