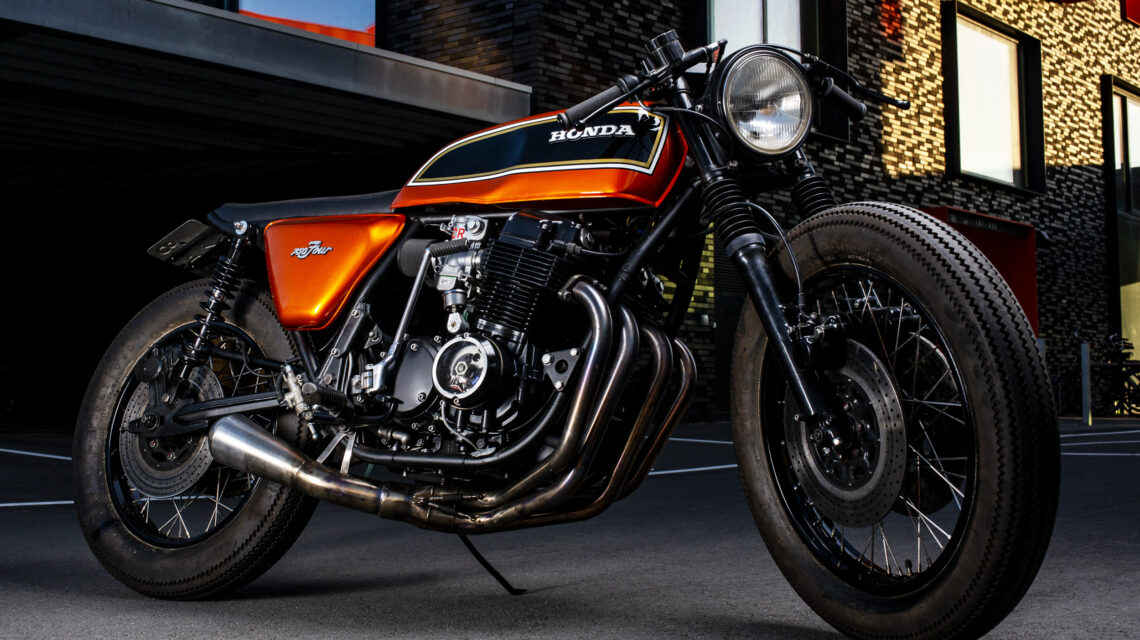 I met Bjorn quite some years ago when he was stranded with his 750 and I picked him up after he called me. Fixed his bike a couple times throughout the years and also told him every time he came in for coffee or repairs his engine internals were done. I could literally hear the primary chains hitting something, and I always thought of it as a timebomb. He said he bought it that way and he would get it fixed when it would eventually break down.

He was not that concerned about it and just kept riding until his rearset broke off during a failed kickstart attempt.Picked the bike up and told him again he was really stretching it with the engine. At that time, we were 3 years down the road from when I first heard the bike… Luckily, he finally felt the same way and he decided a full build would be the best as I could also fix the less demanding problems. The bike was severely mangled. Clearly, looks were the only concern the previous owner had cared about. Front forks were lowered by means of cutting the springs. Forks were dry, seals were gone.

I put new springs in first so the stance in the front would be normal/stock again. With the front forks back in check, I started on the rear of the frame. Bjorn liked the idea of the good ol’ hoop with integrated taillight and I also felt it would fit this build perfect. As the rear of the bike was butchered just as much as the forks, it took some time to sort and clean. After the hoop was bent, I machined the slot for the taillight and tig-welded the hoop in place. Length of the new YSS rear shocks could then be determined and after lowering the forks just an inch with machined internal spacers the right height and stance were accomplished. Next up was the rear brake system. Some kind of clown cut the brake pedal, turned it 90 degrees on the pivot-axle and used it as a lever where he attached the rear sets onto. Brake didn’t work at all, as pushing it resulted in the levers hitting each other before sufficient pressure was even produced. Top job…Took the whole circus of the frame and used a modern rear brake master cilinder to clean things up. New pedal and a new pivotpoint and little custom bracket tig-welded onto the frame cleaned that part up nicely.

I think the headlight position is a very important part of a bike. It’s the face and it needs to look good. Available parts were no match so I made custom ones using stainless tube  and sheetmetal, glued at 60amps.  After shaving the frame, making a removable licenceplate-bracket and some repair welding on the frame (rotten lower rails) the frame, swingarm, rims, hubs and all lots of other metal parts were shipped out for powdercoat. During the coating process, the engine was repaired. My assumptions about the primary chains were dead-on. The engine was opened up somewhere down the road before to address the same problem, but I think they could’t find the right parts because the primary spanner spring was tightened more by means of putting of a bodge-shim under it. WTF. They probably couldn’t find the new primary chains or perhaps they were to expensive, I don’t know… the extra load on the spring made the primary chains go a little further but I’ve never seen primary chains worn that much. I quickly forgot about it and after a full rebuild the engine went back into the freshly coated frame and assembly of the bike began.

Forks were rebuild, and the wheels were laced with fresh stainless spokes, the in-house CNC machined and powdercoated top yoke was put on and the bike was back on the wheels. Exhaust sytem was a tough job on its own. Somewhere in time, heatwrap was put on the pretty Delkevic system and that had caused some weird, deep pitted corrosion on the whole exhaust system. It took me a couple full days to get them clean again. Bjorn delivered a small muffler so that was put onto the collector pipe. Little custom stainless hanger and the exhaust was also done. Bjorn insisted on sidecovers. As i also developed the SumpThing kit, (www.sumpthing.net) it felt a bit weird to build a 750 without the kit on, but in the end, with this build, i think it came out perfect.

The sidepanels give it the stock vibe we were after. Big advantage was I had plenty of room to hide the (stock sized) MotoBatt battery and electrics. Now, the close eye should have noticed the side panels are neither K or F type. In fact, the bike was 3D-scanned and the panels are one-off 3D-printed ones. Reason for this is that the K series have a slightly rounded model but won’t fit the F type frame. Bjorn wanted the round style on his F frame so I made it work this way. As the drawings needed to be made anyway, a slot for the ignitionlock was put into the left panel. The whole right panel is easily taken off to fill oil when needed. We chose this over a extruded fill opening, as it could possibly collide with the rider’s leg and it also looks cleaner.

The CR-carbs give the bike that racey look and also make it GO. Admitted, in combination with the Firestone tires it’s a bit like a guy with a high-vis jacket and camo-pants but it’s a nice extra to give the bike that fresh feeling. To accomodate the high-tech vibe of the Joker machine oil pressure gauge and CR rack I also added an in-house made transparant cover to showcase the Dyna ignition system. Pimpin’ aint easy… Tins and seatpan were shipped (There’s 3 things we don’t do in-house. Paint, Powder and Upholstery) and I started on the wiring. First I installed a quick ignition-only system to let the engine run and check everything. Spliced the Motone switches and Motogadget speedo into the wiringloom and oil and neutral lights are now in the headlight housing.  With the wiring sorted I took the bike for her shakedown runs, testrides and tune-ups using a fuel IV on my helmet strap. Found out this is the easiest way as the carbs and such are easily accesible right away.  The seat and tins came back and put together with new original “HONDA” and “750 FOUR” logos and a coulple days later, directly after the photoshoot, Bjorn happily took delivery of the bike.

All photos by Winchester Creatives – @winchestercreatives